The greatest love confessions in history 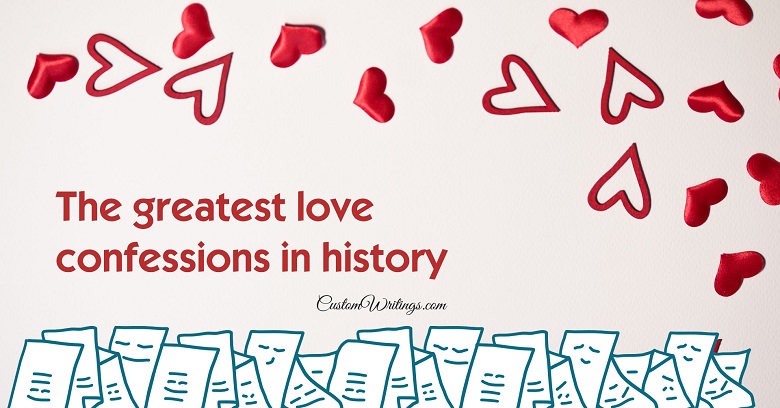 It is the beginning of February now, which means there is the most romantic holiday ahead: Saint Valentine’s Day. This day is a celebration of love for one another, as well as a wonderful opportunity for couples to bring up the best they value in each other. Commonly, Valentine’s Day is a chance for people to come clean about their feelings or for couples to celebrate being together.

For this occasion, we tried to recall the most remarkable couples and the way they declared their love. We collected a selection of the most impressive couples, whose stories inspired, outraged the public, or even changed history.

1.  A crown traded for love: Edward VII and Wallis Simpson

In 1931, the life of Edward, then Prince of Wales, was cordially changed after he met the American socialite Wallis Simpson. Although Simpson was a married woman, the couple started seeing each other three years later. The royal family chose to turn a blind eye to their relationship, viewing it as a short-lived fancy of the prince.

However, at the beginning of the year 1936, Edward succeeded his deceased father, George V. For the newly-crowned Edward VII, it became impossible to continue his relationship with Simpson without jeopardizing the reputation of the crown. He was refused by the prime minister to have even a morganatic marriage with a then-divorced American woman. Eventually, Edward VII abdicated from the throne by the end of the year he was crowned.

The couple made a modest wedding ceremony in June, 1937. Simpson was given the title of person of the year by Times magazine, as her love turned out to be more valuable for the King than his throne, and it changed the course of the United Kingdom’s history.

2.  When one loves one’s art: John Lennon and Yoko Ono

Their love story is one of the most tragic events for dedicated fans of The Beatles. John and Yoko met at an exhibition of the latter in 1966. At that time, they both were established as artists and had their influence in the world. She intrigued the musician by handing him a small piece of paper with a single word “Breathe” on it.

They started seeing each other later, in 1968. At that time, Lennon had a wife and maintained a platonic relationship with Ono. Their affair started with recording an avant-garde tape “Unfinished Music No.1: Two Virgins.” From 1968 on, they grew inseparable.

After the birth of their son, the couple became remarkably secluded. The relationship with Yoko impacted the dynamics in The Beatles and escalated the animosity between all the four members of the band. Eventually, Lennon was the first to leave the band for good, which caused much criticism towards Ono as the cause of the split of the famous group.

Nonetheless, the story of John and Yoko was the inspiration of the ideas behind the Peace Movement and became associated with deep and long-lasting affection for each other, as both of them described their match as “one soul in two bodies.”

One of the most touching and nearly fairytale-like love stories happened in Paris. It is a story of Vladimir Mayakovsky, a Russian poet, and Tatiana Yakovleva, his last love. Passionate and bold as his poetry is, Mayakovsky made up his mind to make a conquest of a Russian emigrant in Paris. Yet, with dog-like dedication, love confessions, or complete obsession over the woman, all the bad boy of the Russian poetry faced was rejection.

Mayakovsky had to leave Paris, but before he did, he took all the money he earned there and gave it to a reputable flower delivery service. He ordered great, luxurious, and beautiful bouquets to be delivered to Tatiana Yakovleva twice a week. She received the flowers with the unchanging message of “From Mayakovsky.”

When the poet returned to the Soviet Union, he realized he could not go to Paris. In 1930, he killed himself. The news about his death shocked Tatiana when she learned. Nonetheless, the next day she received another gorgeous bouquet from the diligent flower delivery company with the same message: “From Mayakovsky.”

Mayakovsky did not end up together with Yakovleva. However, his gesture made him an ever-present part of her life. The “Flowers from Mayakovsky” even helped Yakovleva to avoid starving to death throughout the occupation of France during World War II, as she was selling them to make ends meet. Yakovleva could watch the delivery persons grow, and age. Each of them became a part of a beautiful love story, which is now a Parisian legend.

Lindbergh and Morrow were a couple brought together by the shared interest and love for their favorite work: flying. In fact, their love story developed along with the growth of the air travel technology and industry. For that reason, they are remembered as a couple of flying pioneers of the time.

Charles Lindbergh was fascinated with everything that moves since he was a child. Once, during a flight to Mexico, he met a woman who loved the sky as passionately as he did. Ann Morrow was the daughter of the US ambassador in Mexico, but just as Charles himself, she was only interested in the sky.

The power couple holds a deserved place in this selection for the dedication and support they gave each other and their dream, as well as for showing a heartwarming model of a functional relationship with common vision of life.

5.  A monument to love: Shah Jahan and Mumtaz Mahal

Taj Mahal is not only an architectural marvel. It is also an immense monument to love, and the reason the story of this love is remembered. According to legend, Shah Jahan met his beloved Arjumand Banu walking around a market. The girl was so beautiful that the wooden beads, which she was selling, appeared like magnificent diamonds to the prince. In fact, she was the daughter of the nearest vizier, the padishah, and the niece of his wife.

The prince’s love for Arjumand was so great that he did not want to part with her, so she always accompanied him in crusades, and after Shah Jahan was defeated in the fight against his father, she joined him in his exile. Arjuman received the new name Mumtaz Mahal, which means “the Exalted One of the Palace.”

After giving birth to their fourteenth child, Mumtaz Mahal did not recover and passed away. To honor his beloved wife, Shah Jahan commanded to build a magnificent monument, which later was named “Crown of the Palaces.” The construction of the mausoleum took 22 years. According to the legend, after the construction was completed, the emperor ordered the architect to cut off his hands so that he could not build anything similar or better in the future.

It is a chilling story of love, resistance, death, and madness. It happened in Medieval Portugal and, although some details of the story may seem extreme, all the people in it are real historical figures.

It is a story of Prince Pedro, the heir of King Alfonso IX and Ines de Castro. When the prince saw Ines, it was love at the first sight. However, Pedro already had a wife, Constance, who was the mother of his son. For a long time, Ines and Pedro were having a secret affair. In November of 1345, Pedro’s wife died in labor, and the relationship of lovers became official. Ines moves to a monastery of Santa Clara to be closer to Pedro. There, she gave birth to three sons and one daughter, who were never proven to be legitimate heirs of Pedro.

The monarchy was threatened by Ines’ children, as they could later claim the crown, so the advisors persuaded the King to execute the woman. She was beheaded in the monastery in front of her children. After learning of the death of his beloved woman, Pedro made war against his father. The hostilities were stopped by the demand of the people.

Soon, Alfonso passed and Pedro I became the new king. When he ascended the throne, he proclaimed their marriage with Ines as official and ordered the court to exhume Ines’ body for coronation, so de Castro became the Queen posthumously.

7.  A fairytale in real life: Federico Fellini and Giulietta Masina

For many years, their marriage was an  ideal for all of Italy. The iconic film director Federico Fellini and Giulietta Masina lived in perfect harmony for fifty years and one day. The couple turned each day into their fantasy and embraced each other’s extravaganzas.

They started seeing strange coincidences from the very moment they met. A day before he first saw Masina at the radio station where she worked, Fellini wrote an amusing script. There, his protagonist Cico met his future wife Pallina and asked her for her picture. In real life, Federico saw Giulietta and did the same thing. He wanted to have her picture, allegedly for his film tests. They became Pallina and Cico.

Shortly, they became an inseparable couple. Giulietta always took time to read Federico’s scripts and to discuss them with her husband in a passionate Italian style, when some smashed plates often following her comments. Nonetheless, they made peace every time and ended up with laughter and hugs. Remarkably, Federico Fellini died the day after the fiftieth anniversary of their life together, and the whole of Rome came out to commemorate the great director and celebrate his life.

8.  Bonus. The greatest love of all: Kanye and Kanye

Today, the whole world can enjoy one of the purest and most genuine romances. It is an example of complete self-acceptance and self-reliance, nearly reaching megalomania. It is the image of Kanye West and his love for himself.

If anybody ever happened to question creative confidence, which is common to many artists, Kanye West released a confessional ode to himself humbly named “I Love Kanye.” The song is a part of his 2016 album “The Life of Pablo.” Apart from a clear declaration about his self-image, West speculated about his growth as an artist and music in general.

However, although an exaggerated form, the important message from Kanye everyone could use is self-love. Even if you do not have a valentine this year, and all the retailers actively remind you about that, our self must be number one. So, as the famous saying goes, “If you can’t love yourself, how in the hell are you gonna love somebody else?”

Published by
Lauren Bradshaw
View all posts
Lauren started writing in 2003. Since then, she tried her hand in SEO and website copywriting, composing for blogs, and working as an academic writer. Her main interests lie in content marketing, developing communication skills, and blogging.
RELATED ARTICLES
[DISCLAIMER] Before you start reading this, mind these are not recommendations you should follow. These are just stupid pieces of advice we’ve compiled to make you smile. That’s why you...
From admission essays to sophisticated research papers, our education system relies heavily on essay writing. It’s not a newfound method, though–due to the nature of the writing process, this approach...
You may be surprised, but the culture of organizing holiday markets right before Christmas is not that American. It actually came from Germany, like bratwurst and hot mulled wine that...