How does running make you smarter? 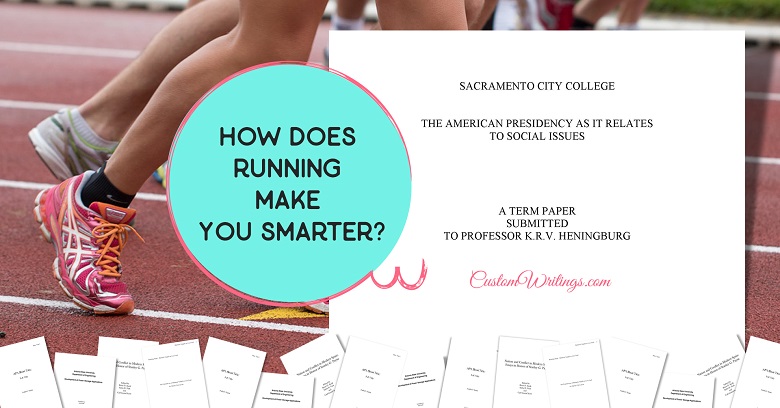 The sun sets in the west, London is the capital of Great Britain, Everest is the highest mountain, and running improves all spheres of one’s life, including memory, attention, and reaction speed.

Nowadays, everyone who has ever been interested in neurobiology or the influence of sports on the brain knows that aerobic activity stimulates neurogenesis. However, this knowledge became common only in 2011 when the study called “Exercise training increases the size of hippocampus and improves memory” was published in Proceedings from the National Academy of Science. 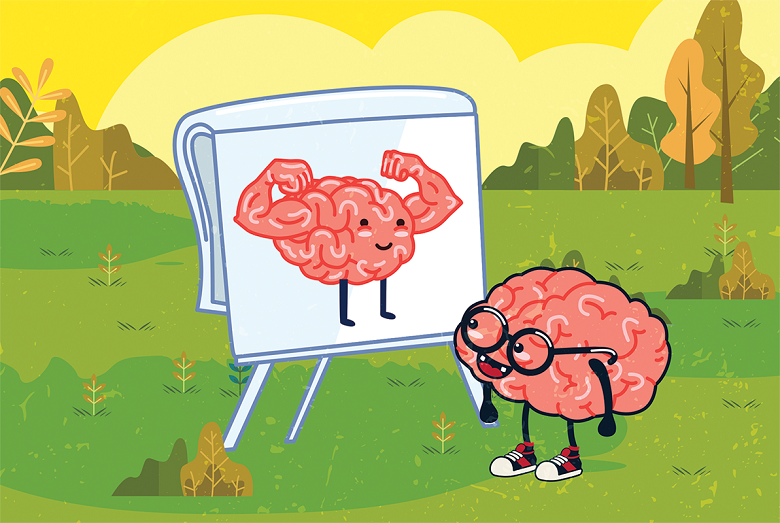 Some 30-40 years ago, medical schools used to teach their students that each person is given a certain amount of brain cells and this number can only drop (with each glass of beer or jolt of drugs) and there is no way to increase the number of neurons after birth. The research study with 120 adults as subjects has shown the substantial improvement in memory among those who were practicing aerobic exercise (jogging) for a one-year period. This improvement, as scientists believe, is correlated with the increased volume of the hippocampus among those subjects. Suddenly, in 2011, the brain happened to be capable of changing in two ways.

Some neuroscientists believe the correlation between the muscles of our body and the brain is even higher, and the influence of running into brain activity is much deeper and older than you might think. For example, Daniel Wolpert believes that moving and sweating are the only two ways we can influence the world around us. And it explains why the only reason the brain was formed is to ensure these movements. Everything our brain does, along with the messages to muscles, is aimed at maximizing the effectiveness of our movements. For example, such things as memory and the need to cognize were developed evolutionary simply to improve our movements.

Such is the logic of evolution, and the conclusion made by Daniel Wolpert. Don’t let the simplicity of the sentence construction confuse you. Human movements are extremely difficult. This is proven by the fact that the best technical engineers still have enormous difficulties with teaching robots to pour water from a bottle into a glass, shake hands, or open doors. This happens because the variables that have to be included in the algorithm of any of these movements are vast. In case of a human being, for example, these movements are based on the memory of previous bottles, handshakes, and doors, on the analysis of what the eyes see, and what the skin feels—and these are only a few things the brain considers before it makes muscles move.

Another proof of the long and inseparable relationship between the brain and movement was obtained thanks to laboratory mice and heartless but curious scientists. In research on the physical exercise effect, there were super-active and super-lazy mice, which were thrown into cold water. The brains of the two groups behaved differently. The lazy mice had an increase in immediate early genes, which are turned on instantly and short-term, stimulated by a neuron. And the active group didn’t have these genes turned on. This is because their brains released more neurotransmitters called GABA, which is known to keep the excitement of the brain in check.

Evolutionary speaking, it demonstrates the activation of the fight-or-flight instinct. If a mouse is in better physical shape, its body doesn’t need to go into overdrive to give it the strength needed to get out of trouble. The bodies of lazy mice in bad shape wanted them to get into the most worked-up state possible so that they could get a better chance to get out of the stress. These surveys show us the basis of an incredible muscle-brain connection that will develop in years to come, but what is important for us today is that if the brain affects movement, then movement can affect the brain. 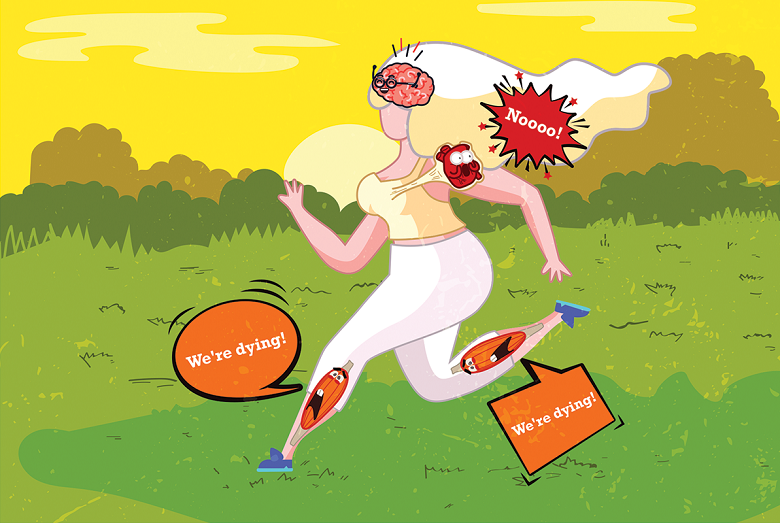 What does new research show?

Running boosts the production of hormones and neurotransmitters that reduce stress as well. This physical activity is perceived by many scientists as a mindfulness meditation (in particular, by Ben Martynoga, the neuroscientist, science, and technology writer), which influences our body the same way that deep meditation does by balancing our mood, increasing focus, taking out anxiety, stimulating neurogenesis, and protecting the brain from signs of aging.

If in 2011, a positive impact on the brain through exercise was observed in elderly people with a deterioration in memory and cognitive abilities. The studies by Wendy Suzuki, a professor of neural science and psychology at the New York University Center, showed that the positive effect of aerobic exercise is also noticeable in years that are considered the peak of mental activity—that is from one’s teen years until one’s mid 30s.

What should we do?

You probably want to know how often and how long you should run. Most researchers on the subject agree that the optimal volume of exercise that will provide you with all the benefits described above is three 30-minute workouts per week.

But don’t take it to extremes. While marathons have a positive effect on the brain, extreme endurance exercises can deteriorate the brain. The observation of several 4.500 km ultra-marathoners has shown the shrinking of their hippocampus up to 6% during such a “workout”. The brain regained its volume in 8 months, but taking into consideration that the average shrink of the brain of elderly people is about 0.2% per year, a 6% change in 64 days (ultra-marathon duration) might be quite a shock to the brain. 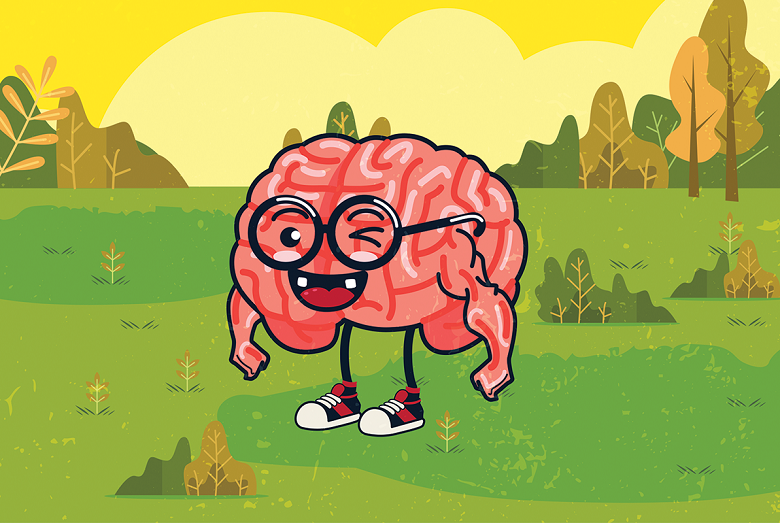 By the way, in 1997, the Korean Parliament decided to increase the number of physical education classes in their schools’ curriculum. The present minister of education of the country says this decision has improved the performance of students much more than any other additional class would have done. So, maybe your grades will also benefit from an extra hour of exercises more than from another dumb paper you see no point in writing. If you decide to check this theory out for yourself, you’re always welcome to use CustomWritings.com, as we’re ready to help you with the most boring academic assignments for you to have more time to increase your brain power by exercises.

Published by
Lauren Bradshaw
View all posts
Lauren started writing in 2003. Since then, she tried her hand in SEO and website copywriting, composing for blogs, and working as an academic writer. Her main interests lie in content marketing, developing communication skills, and blogging.
RELATED ARTICLES
You may be surprised, but the culture of organizing holiday markets right before Christmas is not that American. It actually came from Germany, like bratwurst and hot mulled wine that...
Composing an appealing resume is of great importance for any college or university graduate. You certainly want this document to look its best, and it should utilize the latest trends...
If you are optimistic about your future and positive about the career you want to start, you will benefit from sending an early college application to the school of your...